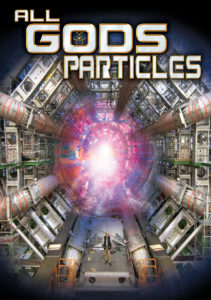 In 2013 scientists made a remarkable discovery which was hailed world-wide as a triumph of human ingenuity. Using a massive machine called a particle accelerator, which is buried beneath the ground in Switzerland, scientists harnessed a mighty power and then smashed particles into each other.

CERN, the scientific research establishment who conducted the experiment, has spent billions of dollars and decades trying to unlock the secret of the Higgs Boson, otherwise known as The God Particle.

Everybody, from NASA to the European Space Agency, was overjoyed. But why the euphoria? Because it is the key to unlocking some of the mysteries of the universe. It helps us to understand the Big Bang and some believe we are even getting close to understanding the mind of God himself.

We delve into the world of quantum physics and dark matter to seek answers to questions mankind has always been asking. One such question being “what is the meaning of life” which is the very driving force behind science itself.

Will the answer be found in these latest discoveries of the Higgs Boson and the gravity wave, or are we simply replacing one religion with another? As half the world starves and populations rebel against their governments, science has spent billions chasing a theory. But surely, if there is a God, then they are all God’s Particles.

In this film, it is shown how all of this and more has in fact been known for centuries… but that science is only now catching up.

“Fascinating insight into realms we still may not truly understand.” – Dr. John Jay Harper, author of Tranceformers, Shamans of the 21st Century

“Critical to the evolution of our species, understanding who and what we are at the core.” – Tom Sims, United Media Network