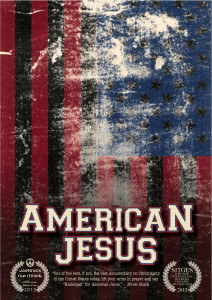 AMERICAN JESUS is a vivid mosaic of personalities and conflicting points of view that emerges as a portrait of an America yearning for solace and meaning in the modern world.

The film is an exploration of Christianity in every faction of American life, from the bread line to the yoga studio, from the humble churches of snake handlers to the mega churches of the ex-urbs. Christian cowboys, bikers and musicians, comedians, surfers and cage-fighters, they are all doing it for Christ.

WHAT THE CRITICS ARE SAYING…

“One of the best, if not, the best documentary on Christianity in the United States today, lift your arms in prayer and say “Hallelujah” for American Jesus.” – Movie Shark 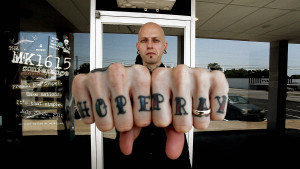 “American Jesus is an important documentary that will redefine how the world looks at
America and how we Americans look at ourselves… with a level of intuitive intelligence I’ve never seen before in a film on religion.” – Huffington Post

complete and diverse a picture of what it means to have faith in America as Aram Garriga’s American Jesus.”– Under the Gun Reviews

“
American Jesus” leaves no stone unturned, examining every aspect of Christianity, including pop culture, bikers, surfers, cowboys and each type of preacher. What emerges is an interesting portrait of religion in our country.”– Pittsburgh Tribune-Review

Public Performance and Digital Site Licenses are available through Soundview Media Partners. To inquire write to info@soundviewmediapartners.com or simply choose the license you seek from the standard options below.