Just prior to its historic screening in Ukraine at Brukivka, BBC Ukraine wrote in support of the importance and impact of the film stating:

“This was a time that no one wanted to speak about. Nobody wanted to relive what happened, what their parents did, or they themselves did to survive. If the first part of the film is full of grave memories against the backdrop of the haunting images, they are balanced out by the heart warming recollections of the Displaced Persons camps created after the war with the aid of the United Nations. There at last flourished the Ukrainian culture, which had been banned for so long at home.” [translated from its original Ukrainian publication]

Caught in the crush between the Nazis and Soviets during World War II, the war seemed endless for many. Ukraine’s borders have often been challenged, as they currently are by Russia’s recent annexation of Crimea and the ongoing disputes along the eastern border. The last war that massively displaced Ukrainians from their homes was World War II. Ukraine was not then a sovereign state, but approximately 2 million Ukrainians were stranded in Western Europe by the war’s end.

Baba Babee Skazala (Grandmother Told Grandmother) tells the story of how, during the second world war, the citizens of Ukraine were suppressed, their liberties denied, and how they were forced to find shelter, in fact escape, from the two opposing forces that surrounded them.

In the crackdown, notably by the Soviets, targeted was the “intelligentsia”, a catch all phrase that included virtually anyone with influence upon Ukrainian society. Anyone with political or church connections, or who had wealth or owned land became targets of Soviet repression. 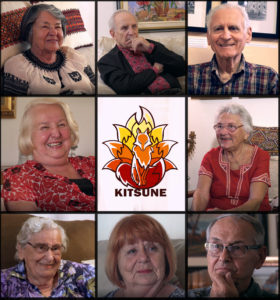 They were called degenerates and criminals.

And, while many were later returned to Ukraine, often forcibly, approximately 200,000 people ended up in Displaced Person (“DP”) Camps, later immigrating to the Americas and elsewhere. Their challenges, in the DP camps and in establishing new “homes,” help us better understand now how immigrant experiences influence American society.

The experiences of the Ukrainian people, children then … senior citizens now… are not well-known outside the Ukrainian diaspora. Russia in fact denies this history. Baba Babee Skazala seeks to change that.

The film is the culmination of over 30 oral history interviews uncovering the experiences of survivors. Some have passed away since the production was finalized. Their stories become only more important.

Included in the film are notable historians providing background and perspective, and serving to move the narrative forward. Among them are…

Critically acclaimed, Baba Babee Skazala is gathering awards and nominations as it exhibits around the world from NY to Paris to Ukraine. Included among them:

Baba Babee Skazala is the work of a young and passionate filmmaker.

MATEJ SILECKY is the Founding Director of Kitsune Tale Productions LLC, but is perhaps best known for being the Runner Up on ITV’s “Dancing On Ice” 2018, with his celebrity partner, Brooke Vincent of ITV’s “Coronation Street.” Matej earned his B.A. in Interdisciplinary Studies from UC Berkeley (film, choreography, landscape architecture, Russian) and a minor in Theater, Dance & Performance Studies. His passion for creating Baba Babee Skazala is rooted in his own personal history.