Barbara Borden: Keeper of the Beat 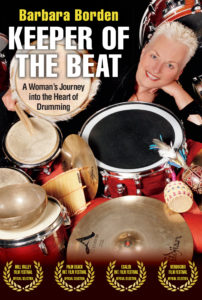 A Woman’s Journey into the Heart of Drumming…

Filmed on four continents, “Barbara Borden: Keeper of the Beat” is a documentary profiling an acclaimed and pioneering drummer, composer and teacher. It tells Borden’s uplifting life-story in eloquent words and incredible music.

The film weaves a variety of performance and archival footage with interviews with noted artists and friends to reveal the many dimensions of the inspiring world-class percussionist who challenged the male dominated world of drumming and found not only success, but world-wide acclaim.

Produced and directed by three-time Emmy-Award winner, David L. Brown. Keeper of the Beat weaves footage from She Dares to Drum, Borden’s autobiographical “percussion play” and other dynamic performances from the last four decades with interviews of noted artists, students, family and friends who know her and the social history of her times.

The musicians featured in live performances include Cris Williamson, Sweet Honey in the Rock, and Linda Tillery. Featured in the film are Barbara Borden (of course), Naomi Newman, and Anna Halprin. 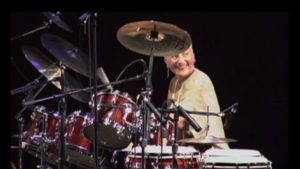 The film tells the story of an incredibly vivacious woman whose love of drumming and music gave her courage, inspiration, and the drive to find connectedness within a widening circle of communities throughout the world.

Viewers watch the unfolding of Borden’s identity as she grows from a determined little girl in love with drumming to a pioneering woman drummer, a world-class percussionist and a world musician.

Archival and original footage shows her career in performance, her leadership in drumming circles and peace and reconciliation projects, her teaching methods to bring drumming into all areas of life, and her exploration into the deeper cultural and ceremonial dimensions of drumming. 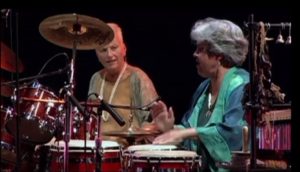 David L. Brown is a San Francisco documentary filmmaker who has produced, written and directed over 80 productions and 17 broadcast documentaries on a variety of issues and topics. His documentaries have received over 85 international awards, include three Emmy Awards, and have been broadcast on PBS and in 16 countries. He has been deeply inspired by Borden’s talent, generosity, indomitable spirit and the genuine, infectious joy she finds in music and community. Brown believes she will be an inspirational role model for every young musician – and music lover – who sees this documentary.

“Keeper of the Beat is a wonderful film; the inspiring story of one talented woman’s crusade to spread the joy and transformative power of drumming to everyone she meets. Barbara is a real powerhouse as a musician and role model.” — Bonnie Raitt 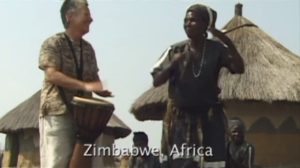 “Part shaman, part pied piper, Borden brings a type of healing and aliveness to us all with her joyful and passionate drumming and her generous gifting to members of other cultures.” —Ellen Shehadeh, Pacific Sun

“Masterful. One of the most enjoyable documentaries I’ve seen in years… It left me feeling energized and uplifted. This is one of my favorite docs.” —Robert Render Harrison, CineSource Magazine

The DVD version features a nice array of bonus material including

Keeper of the Beat trailer from David L. Brown on Vimeo.