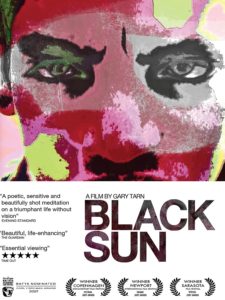 Black Sun by Gary Tarn explores what happens when a visual artist is tragically robbed of his main tool — his eyesight!

The remarkable, award-winning documentary investigates this through the story of Hugues de Montalembert, a New York-based artist and filmmaker who was blinded by a vicious attack in 1978. Defying expectation, the remarkable artist continued to travel the world alone, learning to navigate life in a new and beautiful way.

Through striking imagery and philosophical narration, director and composer Gary Tarn creates an expressionist, poetic meditation on an extraordinary life without vision, and the idea of perception in general in Black Sun.

Produced by Alfonso Cuaron (Y TU MAMA TAMBIEN, CHILDREN OF MEN) and John Battsek (ONE DAY IN SEPTEMBER), BLACK SUN was called “essential viewing” by Time Out and played to rave reviews on HBO.

“Narrated with moving simplicity, exquisitely illustrated… challenges the subjective nature of reality and turns New York into a place that’s at once terrifying and wondrous.

Rarely have the concepts of identity, memory, faith and hope been explored with such poetic courage.” * * * * — David Parkinson, Empire

“A sensual, innovative and ultimately inspirational work about the resilience of the artistic spirit, BLACK SUN pushes documentary convention to the point where it creates its own generic terrain.” – Toronto Star

“A work for all places and times, for anyone who seeks fully to live, to engage, it is indeed essential viewing. *****”– Gareth Evans, TIME OUT No 1 CRITICS CHOICE