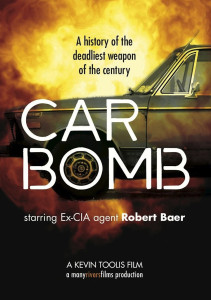 A history of the deadliest weapon of the century featuring ex-CIA agent Robert Baer.

Forget about nuclear missiles, the decisive weapon of the twentieth century is the car bomb. We now know you can defeat a Superpower, start a civil war or just blow up your own government with a trunk-load of homemade explosives and a battered old car. From the Middle East to Oklahoma, Afghanistan and New York’s Times Square, the car bomb has shaped human conflict. Even today it remains the number one terrorist threat across the world.

In this startling film, ex-CIA agent Robert Baer, whose life was depicted by George Clooney in the Oscar-winning movie `Syriana,` uncovers the history of this extraordinary weapon for the first time.

“Through emotional interviews with other bomb experts and even bomb-layers, Baer takes the viewer on a history of the weapon that [he] considers one of, if not the most dangerous weapon of the 21st century. Baer talks to historians, other CIA agents and even former terrorists, some of whom are quite shaken by the memories and questions Baer brings up as an interviewer.” – DVD Talk

“The footage in this documentary is both compelling and educational. Mr. Baer takes us, the viewer, on a rollercoaster ride of facts and international intrigue. The editing in the program is exquisite as well and helps Mr. Baer tell his story in a clear and concise manner.” – Just Press Play

About Robert Baer: Robert Booker “Bob” Baer (born July 1, 1952) is an American author and a former CIA case officer who was primarily assigned to the Middle East. He is Time‘s intelligence columnist and has contributed to Vanity Fair, The Wall Street Journal, and The Washington Post. Baer is a frequent commentator and author about issues related to international relations, espionage and U.S. foreign policy.