Chasing the Devil: Inside the Ex-Gay Movement 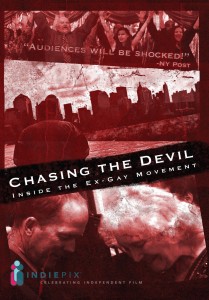 CHASING THE DEVIL: INSIDE THE EX-GAY MOVEMENT, is a documentary film presenting an unflinching look at the personal journeys of four people who claim to have changed their sexual orientation from gay to straight. Their stories mark the first time documentary filmmakers have been allowed inside the ex-gay movement, and provide an empathetic and at times devastating portrait of those who claim homosexuality is an illness that can be healed.

John Sterback is a member of the most politically incorrect subculture in America. He’s a self-described ‘Ex’gay’, someone who claims to have changed his sexual orientation from gay to straight. Richard Cohen is John’s inspiration. He represents the face of the ex-gay movement, while working hard to hide his own controversial past.

CHASING THE DEVIL uncovers the truth behind the claims of reparative therapists who attack gay identity as nothing more than a developmental disorder that can be fixed witha healthy dose of therapy and prayer. Joanne Highley and Peterson Toscano take viewers even deeper, inside the world of ex-gay ministries — specifically journeying inside New York City’s Life Ministry, where Demons are believed to cause homosexuality and exorcisms are the preferred form of treatment.

An official selection at several prestigious film festivals, CHASING THE DEVIL will shock, amaze and sadden you, while revealing the lengths that people will go to deny painful truths, or to fit in with a culture that shuns them.