Chickenfoot – Get Your Buzz On Live 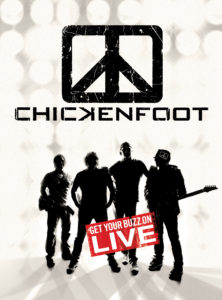 Four rock legends take to one stage for an incredible musical event. Experience a Chickenfoot concert live like you were there the night it was filmed.

Shot in HD with 16 cameras over 3 Sold-Out shows, “Chickenfoot – Get Your Buzz On” offers viewers a once-in-a-lifetime chance to see 4 Rock and Roll Legends share the stage and blow the fans away with their combined extraordinary talents. Chickenfoot is absolutely greater than the sum of it parts.

The film includes one full show shot at the Dodge Theater in Phoenix, AZ, and segments from shows at the Tabernacle in Atlanta, GA and The Rock & Roll Hall Of Fame in Cleveland.

The bonus features are robust and include never-before-seen backstage footage, interviews with the band, extra performance footage, a photo gallery and not to be missed funny segments featuring “Surprise Special Guests” Adam Corolla, Bob Weir and Christopher Guest as “Nigel Tufnel” from the hit movie Spinal Tap.

6. Bitten By The Wolf