CULT OF THE SUICIDE BOMBER 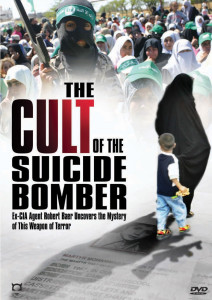 Their devastating and deadly actions punctuate the world news almost nightly, yet they remain faceless figures amidst the violence and turmoil that engulf the Middle East and well beyond. What could possibly compel a suicide bomber to voluntarily take their own lives, along with those of hundreds of innocent victims?

There is perhaps no one better equipped to investigate this terrifying practice than Robert Baer that has driven many desperate fanatics to seek honor and glory through death and destruction.

From the 13-year-old boy that would serve as the world’s first suicide bomber during the Iran-Iraq War to the truck bombers of South Lebanon and the modern-day “martyrs” who strap themselves with explosives before boarding Tel Aviv busses, Baer attempts to find out where the concept of suicide bombing went from battlefield strategy to urban-warfare standard.

“Robert Baer, an ordinary-looking former CIA agent who was the model for the character played by George Clooney in Syriana, here employs his formidable linguistic skills and knowledge of the Middle East to investigate the origin and development of an enormously significant figure in the modern world—the suicide bomber. His interest in the subject derives from his own experience (Baer was very nearly onsite when hundreds of U.S. marines were killed in Lebanon during the Reagan years), and he takes advantage of old contacts and his ability to converse in native languages to trace the ideology and tactics behind the practice of suicide bombing, from its genesis during the Iran-Iraq War to the recent post-9/11 incidents in Madrid and London. Baer exhibits some of the courage that must have marked his government service by going to the source—in Iran, for example, he interviews the parents of the young man celebrated for becoming the first “martyr” of the movement when he strapped explosives onto his body and destroyed an enemy tank, and he travels into the violence-torn Palestinian territories. The film points out that suicide bombing has now proliferated well beyond the control of those who once directed such operations, as “revolutionary” movements have fragmented and multiplied. While Baer offers no easy explanations or quick solutions here, his attempt to understand those who are often depicted as simply unfathomable fanatics is both compelling and insightful. Highly recommended.” – Video Librarian