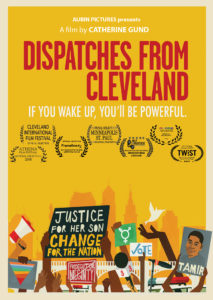 If you wake up, you’ll be powerful!

Dispatches From Cleveland is a 2017 feature-length documentary that closely examines the rust-belt city of Cleveland; one of the most racially divided American cities in the wake of the police murder of Tamir Rice.

The film follows ordinary people – long shaken by police misconduct, social discrimination, injustice and poverty – whose love for their home pushes them to work together to bring about real change.

Dispatches from Cleveland has been compared to films like ‘Detropia,’ ‘Whose Streets,’ and ‘He Named Me Malala’ and is garnering strong critical acclaim including festival play at

“…as much as it is important to understand our past so as not to repeat it, knowing how to build our future is just as important. Dispatches from Cleveland shows us how.” —Leigh Monson, substreammagazine.com

“‘Dispatches From Cleveland’ may offer a clear-eyed presentation of realities in Cleveland’s poorer half. But it doesn’t wallow in factual miserabilism.” —Peter Wong, beyondchron.org

“… poignant, sobering, and powerful… a galvanizing tool, a way to empower people and convince them to get involved in their local communities, and work to make a difference. “ — Anne Zaleski, Cleveland Film Society

“…hits you with an emotional sledgehammer in the opening credits.” — Kelly Petryszyn, Cleveland Magazine