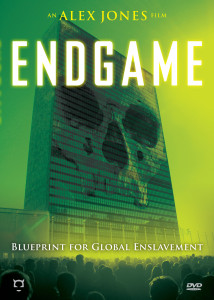 ocumentary, Endgame, posits several theories relating to “the dawn of a new dark age” in which a few elite businessmen are planning to erase global boundaries in order to conglomerate the governance of three disempowered populations: the E.U., the North American Union, and the Asian Union modeled after Communist China. This plan allegedly involves depopulating countries around the world, constructing superhighways that connect otherwise unreachable regions throughout America, and forming paramilitary groups to infringe on personal freedoms and privacies. Interview footage of journalist Jim Tucker among many dubious others is spliced amongst myriad historical footage of the past two World Wars, right wing political speeches, eugenics charts, and shots of woodcuts depicting Napoleanic conquests and the Roman empire, impling that our society’s political conservatism bears resemblance. But in tracing the formations of the League of Nations, the U.N., and finally Bilderberg Group in
1954, Endgame accuses these groups of trying to merge countries and eliminate international borders, without really assessing the fact that this has
never been a secret. It will also seem obvious to many viewers that private parties “bankroll” wars for economic gain, not always philanthropic. Toward the film’s end, an extended segment about Planned Parenthood’s ties to early eugenics groups, which accuses Ted Turner and Bill Gates of buying into
depopulation plans because both have donated funding to promote birth control in third world countries, reveals a pro-life agenda. In addition, after watching multiple clips of Jones himself yelling into people’s car windows, wondering why the airport security are detaining him for following businessmen with a camera, stalking visitors at a Canadian hotel, and making other various rash gestures, it is difficult not to see Endgame as one man’s elaborately considered conspiracy theory. —Trinie Dalton

Buy it on Amazon: http://amzn.to/YIA7DT