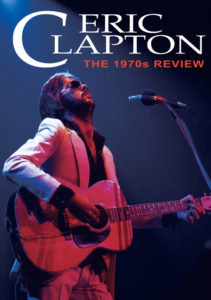 This film is a retrospect that follows Eric Clapton’s bold musical journey through the 1970s, with exclusive interviews, rare footage and more.

The nearly 3 hour documentary features new and archival interviews, rare performances and footage, and extensive contributions from acclaimed musicians including Bonnie Bramlett, Bobby Whitlock (Derek and the Dominos), The Albert Brothers , George Terry, Willie Perkins, Bill Halverson, Clapton biographer Marc Roberty and others, plus a host of other features.

The film tracks “how Clapton’s encounters with artists like Bob Dylan and the Band led him to, in the words of executive producer Rob Johnstone, “go back to the country” and rethink his sound.” – Village Voice

A rare and exclusive clip of “Why Does Love Got to Be So Sad?” leads into a discussion of Derek and the Dominos’ album production of their one and only record “Layla and Other Assorted Love Songs”, and its aftermath. The film, however, continues through the entire decade, moving on to Clapton’s 1975 comeback LP, 461 Ocean Boulevard, and beyond. It additionally includes insight into how how drugs undid Eric Clapton and the Dominos.

“Eric Clapton: The 1970s Review is an infinitely watchable and informative look at one of the world’s greatest and most inventive guitar players set against a backdrop of the music industry with both surviving and long-gone musicians strutting and fretting their moments in Clapton’s limelight” – Pop Matters