Eyes of Me, The 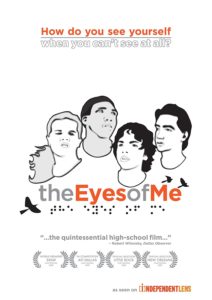 How do you see yourself, when you can’t see at all?

THE EYES OF ME presents an extraordinary look at four blind teenagers. The parallel stories of two freshmen and two seniors unfold over the course of one dynamic year at the Texas School for the Blind in Austin.

Distilled from over 250 hours of footage, this experiential documentary captures a textured portrait of its characters’ lives. Director Keith Maitland worked closely with the film’s subjects to produce sequences of stylized rotoscopic animation to complement the film’s observational aesthetic.

The stories of the film’s central characters offer a fresh perspective on growing up, fitting in, and preparing for the future. Forced to confront the world without sight, they share their thoughts, their perceptions, their inner-visions of the outer world. Ultimately, you cannot understand their perceptions without challenging your own.

Originally broadcast on PBS-aired Independent Lens, THE EYES OF ME is “HIGHLY RECOMMENDED” by Video Librarian.

“The simplicity of this film is compelling and it reinforces the fact that a lack of sight does not equate to a lack of insight.”– Emily Hargrove, AFI Dallas Film Festival

“Full of the requisite angst and hope and despair and joy you’ll find in every single hallway and every single locker. A remarkable accomplishment…” – Robert Wilonsky, Dallas Observer

“THE EYES OF ME accomplishes what the best films do – take us into another world and help us see/feel what it is like to be other people with different situations, experiences, and options… a supremely eye-opening film that helps put problems and obstacles into perspective.” – Chale Nafus, Director of Programming, Austin Film Society