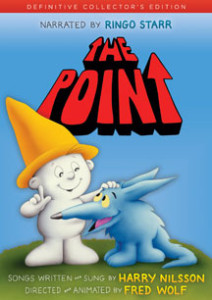 Never has nonconformity been celebrated with such charm.” — Jeff Miers, Buffalo News

Directed by Academy Award-winner Fred Wolf, “The Point” tells the story of Oblio, a round-headed boy living in the land of “Point,” where everything and everybody has one. Oblio, along with his trusty dog, Arrow, is banished to the Pointless Forest.

The tale is narrated by Ringo Starr and includes songs written and sung by Grammy Award-winner Harry Nilsson. This is the definitive collector’s edition.

“Finally, a new generation of kids can float away on the entrancing cartoon creation of Harry Nilsson (1941-94), the American singer-songwriter who counted the Beatles among his admirers. The Point is a prime example of mass-culture outreach by a countercultural artist (dig the psychedelic number ”P.O.V. Waltz”). B+” —Ken Tucker, Entertainment Weekly

The Point! first aired February 2, 1971, and was the first animated special ever to air in prime time on US television; it broadcast as part of the network’s ABC Movie of the Week series.