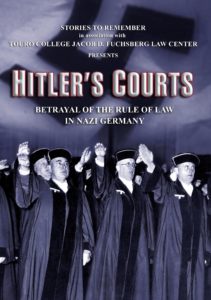 To summarize this betrayal was a position taken by Roland Freisler, State Secretary of the Reich Ministry of Justice, and President of the People’s Court.

“For the enemy of the state, there is only one course in prosecution and sentencing – unflinching severity and, if necessary, total annihilation.”

Freisler was an attendee at the Wannsee Conference in 1942. It was this position taken on by the Nazis that set in motion the Holocaust.

“Brilliant and chilling, a powerful reminder that the rule of law can be used to advance either freedom or the worst that human beings can do”  – Erwin Chemerinsky, Professor of Law, Duke University 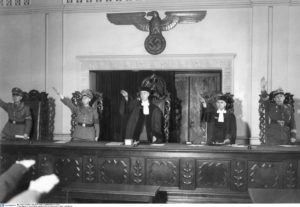 The extensive interviews were filmed in July 2005 in Nuremberg, Germany at the Touro College Jacob D. Fuchsberg Law Center’s Conference “Judging Nuremberg: The Laws, The Rallies, The Trials” and included

Stock Footage and Photographs supplied by 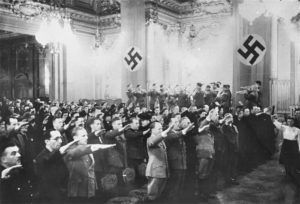 “One of the most compelling documentaries I have ever seen – high drama, profound historical understanding and, most important, extraordinary lessons for the present” – Richard D. Heffner, PBS Producer/Host “The Open Mind”

“Excellently produced – A perfect tool for examining the misuse of law and the inhumanity that fueled the Shoah” – Beth Selden Dotan, Director Omaha Institute of Holocaust Education

Public Performance and Digital Site Licenses are available through Soundview Media Partners. To inquire or to place an
order, write to info@soundviewmediapartners.com or simply choose from the options below:

Delivery of Hitler’s Courts on disc is as a DVDr in plain sleeve. The film is also included as a bonus on our DVD film “Memory After Belsen” so you may want to consider that for purchasing.