I Am Still Here 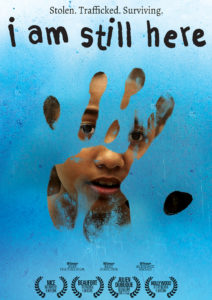 Layla is ten years old and about to meet her new family. She just doesn’t know it yet.

An act of kindness is met with deception and leads to Layla’s abduction and descent into a life of human trafficking hidden in an ordinary American neighborhood. To survive, Layla must trust them, but her only way out may well be the way she got in.

Seven years later, Layla is discovered lying half-dead in an alley, unable to speak. Detective Amy Walker helps Layla untangle the memories of her horrific past to bring her perpetrators to justice so that Layla can start anew.

Starring Johnny Rey Diaz (Queen of the South), Erika Ringor (Love & Basketball), and Ciara Jiana (Sharknado) , I Am Still Here is a story of hope and redemption told through the eyes of a seventeen-year-old girl recovering after her escape from seven years in captivity.

“I Am Still Here is a story of hope and redemption told through the eyes of a seventeen-year-old girl recovering after her escape from seven years in captivity as a sex slave. The film portrays with brutal honesty, the unimaginable circumstances of a young girl, Layla, kidnapped for sex slavery. I Am Still Here captures how her life is saved through the power of friendship, the empowerment of female spirit, and the strength of ​family.” – Rotten Tomatoes

I Am Still Here has garnered 33 festival awards including, but not limited to