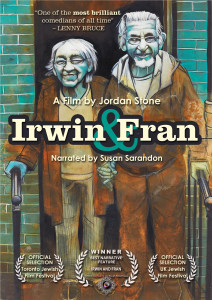 “I feel more like I do now than when I first got here.” — Professor Irwin Corey, The world’s foremost authority

***”An entertaining profile of a comic original. Recommended” – Video Librarian

“Corey is a cultural clown, a parody of literacy, a travesty of all that our civilization holds dear, and one of the funniest grotesques in America. He is Chaplin’s tramp with a college education” – KENNETH TYNAN, The New Yorker

“One of the most brilliant comedians of all time”  – LENNY BRUCE

Blacklisted at the peak of his career, the centenarian comedian now returns with Fran at his side as he unbuckles the controversial wisdom of 77 years of pure comic genius, all the while showcasing New York City and his remarkable place in its pantheon of comedic legends.

WATCH THE TRAILER BELOW