ISLAM: WHAT THE WEST NEEDS TO KNOW 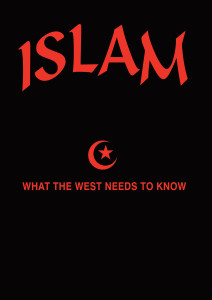 “If their central thesis is true-and it’s worth considering-then this is the most horrific film of the 21st century so far.” – The Charlotte Observer

“I found this documentary to go a long way in challenging my preconceived ideas, by presenting material directly from the Koran and experts on Islam. HIGHLY RECOMMENDED.” – DVD Talk

“This film is by far the most interesting presentation of Islam that I have yet to see” – Top Documentaries “…thought-provoking..” — Atlanta Journal-Constitution

“This movie is startling and compelling, not because it offers propaganda or sensationalism, but because it strips all pretense down to the very basic and very obvious facts as put forth in the Koran” – DVD Movie Central

An examination of Islam, violence, and the fate of the non-Muslim world.

Virtually every major Western leader has over the past several years expressed the view that Islam is a peaceful religion and that those who commit violence in its name are fanatics who misinterpret its tenets. This claim, while widely circulated, rarely attracts serious public examination. Now, the question is finally being asked, “Is Islam itself violent?”

Through an examination of the Koran, other Islamic texts, and the example of the prophet Muhammad, this documentary establishes, through a sober and methodical presentation, that violence against non-Muslims is and has always been an integral aspect of Islam. “Jihad,” while best translated as “struggle,” as represented in the Koran and the life of Muhammad, means nothing less than organized warfare against unbelievers.

Relying primarily on Islam’s own sources, this documentary demonstrates that Islam is a violent, expansionary ideology that seeks the destruction or subjugation of other faiths, cultures, and systems of government. The documentary consists of original interviews, citations from Islamic texts, Islamic artwork, computer-animated maps, footage of Western leaders, and Islamic television broadcasts. Its tone is sober, methodical, and compelling.

Buy it on AMAZON: http://amzn.to/10ql0Og or stream/download

Islam: What the West Needs to Know – Trailer from TDC Entertainment on Vimeo.