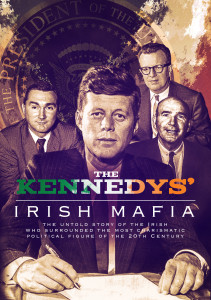 Explores the never before told story of the Irish who surrounded JFK and the Kennedy family.

Nowhere was the assassination of President John F. Kennedy more acutely felt than in his ancestral homeland of Ireland.

What was known as Kennedys’ “Irish Mafia” became the key advisors surrounding the President. Men like Dave Powers, Larry O’Brien and Kenny O’Donnell, selected for their loyalty and devotion to JFK and his family. This group helped him win the Presidency, grieved for his passing and provided political support to his successors for decades after his passing.

The Kennedys’ Irish Mafia tells the untold story of the Irish who surrounded the most charismatic political figure of the 20th Century. Who they were, how they supported their leader, and the price some of them paid for this unswerving devotion.

This historically eye-opening documentary features interviews with key witnesses to the Kennedy Presidency, professional and amateur archive footage and new scenes of the locations and reminiscences of one of the most remarkable periods in modern history.