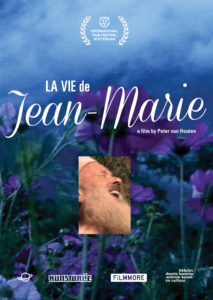 A brilliant, bold and refreshingly irreverent documentary shot in the style of cinéma vérité. LA VIE DE JEAN-MARIE is a feel-good portrait of a spirited 75-year old priest.

A beautiful, poetic story of an aging Dutch pastor who – probably as the very last one – watches over the spiritual life of about 25 villages in the French Pyrenees and does so with an unprecedented vivacity, sincerity and sensitivity for female beauty.

It is also about a man torn between two loves: women and Jesus…

“The strange pastor/farmer never stops talking, but does so with such a disarming honesty and spontaneity that you can’t help falling for him.” – International Film Festival of Rotterdam

“Filmmaker Peter van Houton delivers an intimate portrait of an elfin septuagenarian priest serving a collection of small parishes in the French Pyrenees in this leisurely but engrossing, often touching, and in the end surprising documentary. Some sequences show Jean-Marie Raaijmakers attending a Bastille Day celebration or a village music festival, but long stretches are devoted to his puttering about in his garden (cutting flowers for the altar or planting seeds and shoots), doing repairs on his rectory, or surveying a half-built new church he has worked on over the years but now admits he will never be able to complete. Other segments center on recollections of his youth—many revolving around his memories of beautiful young women he once courted or even

proposed to (without success)—and his somewhat peculiar theological pronouncements, often dealing with the priestly requirement of celibacy. Van Houton also follows Jean-Marie on his rounds from parish to parish saying Mass and visiting the sick; at one stop he says his service is partially aimed at helping the souls of fetuses (aborted in the village years before) to find eternal rest. The film also introduces two women in Jean-Marie’s life—parish secretary Marie-Claire and a friend named Chantal, whose closeness to Jean-Marie has set some of his parishioners’ tongues wagging. Jean-Marie will eventually reach a decision that will mean great changes both for himself and the people he has ministered to for so long. A lyrical film, this is HIGHLY RECOMMENDED.” – Video Librarian

A film by Peter Van Houten