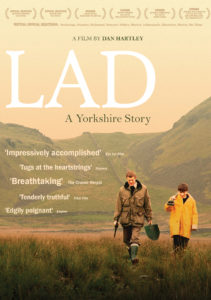 After the death of his father, a boy forms a friendship with a park ranger in the Yorkshire Dales.

When Tom Proctor’s father passes away, his world falls apart; his brother joins the army, his mother is threatened with eviction, and Tom gets into trouble with the police. Tom’s life is turned around, however, when he’s paired up with park ranger Al Thorpe.

Based on a true story and set in the stnning Yorkshire Dales, this acclaimed coming-of-age story is as enchanting as it is inspiring. The debut feature film from BAFTA Cymru nominee Dan Hartley.

“An affecting story of a brokenhearted child who experiences great loss and rapid change, this is recommended.” – Video Librarian

“A poetic tribute to a much-loved place but with the blunted, rain-washed edges the land knows well.” – Eye for Film

“The audience is easily immersed in the title’s setting, but what really hooks us are the film’s characters, who come across so effortlessly real

and natural.” – Keeping It Reel

A multi-award winner, “Lad” has taken home the following prizes: