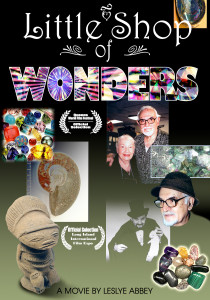 A farewell to one unique Mom & Pop neighborhood store and the local characters.

Murray (Mark) Morgan was born in New York City in 1925. He grew up in the Bronx and after school worked for fashion photographer Harold Stein. In 1949, Mark and his family moved Long Island, New York.

People came from all over to The Little Shop of Wonders to view their collections, as well as to seek their advice about gemstones and healing.