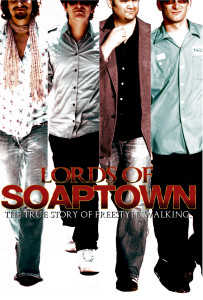 The insane true story of the world’s strangest sport – Freestyle Walking – and the business that resulted.

Lords of Soaptown is the true story of four kids from the Chicago suburbs having their sport censored and banned in the halls of their school. It resonated across the country, and then spread from Chicago to the four corners of the globe.

Tom Mottier, Brandon Kennedy, Mike Rempert and Brian White created the sport that took part of the country sort of by storm in 1996. On the success of the Freestyle Walking piece on MTV News Unfiltered, the 15-year-olds from Wheaton, Illinois saw their first taste of fame, and saw their pastime start to catch on. MTV even recruited them to shoot new footage to help promote “Unfiltered” and capitalize on the short video’s success. It went viral before the term existed.