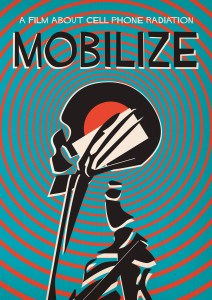 In 2011 the World Health Organization stated, “The electromagnetic fields produced by mobile phones are classified by the International Agency for Research on Cancer as possibly carcinogenic to humans.” The cell phone industry has vigorously disputed these findings.

MOBILIZE is an explosive investigative documentary that explores the potential long-term health effects from cell phone radiation, including brain cancer and infertility.

“3.5 stars. Mobilize illustrates how the lobbying and legal powers of the

telecommunications industry have been able to shut down any legislative or judicial attempts to curb emissions (or even educate consumers). An alarming documentary with
unquestionably controversial findings, this is highly recommended.” – Video Librarian

Even the Observer chimed in with “As long as lobbying money is more powerful than our willingness to seriously look at the devices up in our pockets, we will continue to not know and make cynical jokes that our cell phones are killing us, instead of very seriously asking if they are.”

In-home/personal use copies of the DVD are available on Amazon: http://amzn.to/1mSUTK0 or directly from the publisher. If you prefer to stream, Mobilize is avail on Amazon Prime https://amzn.to/2VCk5zr