On the Road, Somewhere (Algún Lugar) 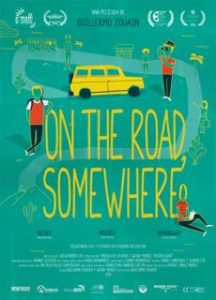 In Santiago, best friends Oliver, Moises and Hemingway are preparing for a ritual known to middle-class teenagers around the world—one last carefree summer road trip, just before college, when the first steps into adulthood will begin and everything they know will change.

The boys map a route from Montecristi in the north to points east, with an eventual destination of Pedernales in the south, where Oliver’s high school girlfriend Veronica is staying with her grandmother, until she leaves to study in New York in the fall. Along the way, the car breaks down frequently, leaving the three boys stranded with nearly every character under the Dominican sun.

As their hilarious conversations, arguments and riffs on popular culture, national identity and politics build momentum, an emblematic snapshot of both the joys and insecurities of contemporary Dominican society emerges.