This film is no longer available through Soundview Media Partners (effective 3-20-18). In-home/personal use copies remain available on Amazon: http://amzn.to/2aNpvC2

Why is there a multi-industry conspiracy to keep an approved drug off the market that if prescribed could save thousands? 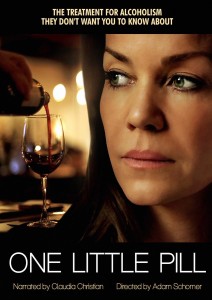 Worldwide, alcohol abuse kills more people than HIV – nearly 3.3 million per year. Yet what the public believes, and what Alcoholics Anonymous purports, ‘Once an alcoholic, always an alcoholic,’ is not as true as you think. Nor is abstinence, the fundamental principle for treating alcoholism that we all take as truth.

So why has one modality dominated our thought since the 1930’s? Why are profitable rehab facilities reluctant to change? And why are millions of people still being denied the opportunity of a simple life saving method and drug that have been FDA approved since 1994?

“A stunning expose of the current social forces that delay or even obstruct all new advances in medicine. …[a] beautifully produced documentary. – Tom Neff, Founder of the Documentary Channel

One Little Pill takes an in-depth look at a simple, safe, and successful method for treating alcoholism, the suppressing obstacles surrounding it, and those people just now finding it.

“A must-see film for anyone who has ever struggled with alcohol, or loved someone who has. It shows how a simple, generic medication can quell alcohol cravings — and how outrageous it is that this treatment isn’t more widely available.” – Gabrielle Glaser, Journalist and NY Times best-selling author

“I hope the film gets the exposure it deserves, and people take notice of it, especially in the treatment field. It is the sort of story that could really help if the press pick up on it.” – Recovering from Recovery