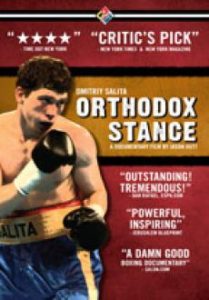 For  60+ years, the term “Jewish boxer” has been an oxymoron. But Dmitriy Salita, a 25 year-old Russian immigrant made history as a top professional boxer and a rigorously observant Jew.

While providing an intimate, 3-year long look at the trials and tribulations faced by an up and coming professional boxer, ORTHODOX STANCE is a portrait of seemingly incompatible cultures and characters…boxing promoters, trainers and Orthodox Rabbis…working together to support Dmitriy’s rare and remarkable devotion to both Orthodox Judaism and the pursuit of a professional boxing title. In the end, the film is about more than just boxing and religion, but a young man’s search for meaning in life.

At a time when religion increasingly divides and destroys, Orthodox Stance presents a unique, yet universal, story that provides an example for Jews and non-Jews of the positive effects of faith, tolerance, diversity and pluralism-the things people talk about when they talk about the greatness of America.

“In the intriguingly layered documentary Orthodox Stance, a determined young boxer strives to prove that the laws of God and the laws of the ring need not be at odds.” – Jeannette Catsoulis, The New York Times (Critic’s Pick)

“Jason Hutts slow-burning documentary chronicles the fascinating career of Dmitriy Salita, an endearingly humble Ukrainian-born Brooklynite (and subject of a 2006 profile in this magazine) who struggles to maintain his faith as an Orthodox Jew while swiftly rising to the top of the professional boxing circuit.” – New York Magazine (Critic’s Pick)

When initially releases, Orthodox Stance received extensive festival play (see below) and is as pertinent now as it was then: