Overland Project (Series 12): In the heart of Black Africa 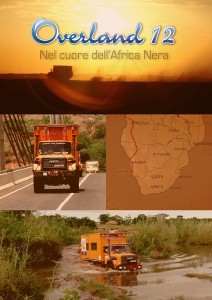 An expansive 12+ hour, 16 episode series that journeys across the heart of Black Africa.

Started in 1995, the Overland project has now covered 440,000 km around the world shooting a unique and extensive video portrait of our planet.

Showing the world’s most remote areas and unknown cultures, while providing help to those in need, the four legendary Overland orange trucks have been at the forefront of UNICEF in many countries providing medical care to assist populations while documenting the world in and on which we live.

Overland Project (Series 12): In the heart of Black Africa

Overland 12 was the most troubled and difficult journey of the Overland history.  The Overland team faced the unknown in Africa, a fascinating continent known mostly for its wars and disasters. The Black Continent has much more to offer and, in Overland style, the team attempts to create an authentic and enthralling portrait far from rhetoric’s to create a practical and creative solidarity.

The planned itinerary was extremely ambitious not only for the road conditions, the distances, geographical boundaries but mainly due to the wars affecting the majority of the African countries that they intended to cross. In six months they crossed  32 countries, of which only half a dozen were considered “safe” and the same amount classified as high risk.

Other than war, this continent offers much more: from the desert to the Savannah, from the mountains to the rain forests to the Atlantic beaches. Africa is also a mosaic of populations, cultures and religions, and this series has taken the time to provide the World insights that support respect and dignity to this land.

From the Mediterranean coast of Morocco the team headed towards south-west Africa, leaving the Sahara strip to enter the Savannah and then the forest. Crossing Mauritania, Senegal, Gambia, Guinea Ivory Coast, with Ghana, Togo and Benin they visited the remains of the great black reigns, the origins of voodoo and some of the main points of the slave trade. As rich in petrol as it is, Nigeria can’t escape the African paradox: huge resources that do not reach the population.

Further south, Cameron and Gabon exhibited Africa’s tropical wildlife, whilst unfortunately in Congo and Angola the experienced (not for the first time) the effects of war. In Namibia it was time to go back into the desert, to Botswana, one of the world’s animal paradises and the beauty of the Victoria falls in Zambia.

The journey upwards started from Cape North and central Africa and led to the difficult tracks of the rainforest in Congo. The Sahara greeted their arrival in Chad and escorted them all the way through Sudan and Egypt.

Episode 1 – Morocco and Mauritania: the outskirts of the Sahara

Reached by boat on the Mediterranean coast of Morocco, the Overland expedition heads south towards the beautiful but troubled West Africa. Across Western Sahara and Mauritania we will gradually leave Saharan Africa to enter that of the savanna, meeting Black Africa.

Episode 2 – Mali: to the mythical Timbuktu

Mali gives us the charms of the desert where the sand of the Sahara reaches down to the great Niger River, engulfing the most legendary city of exits according to the myth; Timbuktu. By unscrewing the shade of the inaccessible villages of Dogon, Overland will take us to the discovery of a glorious page in the history of the continent.

Leaving the calmness of Mali behind, we are faced with the raw reality of conflict. If Guinea seems to have taken a step back, Sierra Leone and Liberia face a difficult reconstruction after the civil wars among the most atrocious of recent decades.

Episode 4 – Côte d’Ivoire, Ghana and Togo: the origins of voodoo

The adventurous journey of the Overland team at the discovery of West Africa has a few surprises in store for us today. In Ghana, Togo and Benin there are a few expected traces of the great kingdoms of the African empires, the roots of voodoo and some of the terminals of the slave trade.

Episode 5 – Benin, Nigeria and Cameroon: lights and shadows of the Dark Continent

After leaving West Africa, the convoy of Overland begins the descent to the southern end of the continent. It is rich in oil, Nigeria is not immune to the African paradox: high level of resources that do not reach the population. Then, further south, the forests of Cameroon where we speak of the lush vegetation of tropical Africa.

Episode 6 – Cameroon, Gabon and Congo: in the realm of the forest

Overland crosses the equator, the imaginary line that divides the earth into halves: the adventure moves in the Southern Hemisphere. In Cameroon, Gabon and Congo, our orange friends will have to deal with the world of the green forest, facing dangerous slopes that form the prelude to the difficulties of the upcoming weeks.

Coming from a long civil war of almost thirty years, Angola is especially known to the world for oil, diamonds and mines. Overland will continue through it as a whole, to witness the tragic consequences of a conflict played in the shadow of the Cold War.

Episode 8 – Namibia and South Africa: the thousands of suggestions of weldt

Found among the picturesque desert scenery of Namibia, Overland prepares to complete the first part of our great African adventure. The arrival at the Cape of Good Hope at the southern tip of the continent, marks the halfway point. The next stop will be Cairo.

Once reached Cape Town, Overland 12 prepares to face the second part of it’s great adventure to discover the Black continent from South Africa after apartheid, we move  beyond where nature reigns, in the great parks of Botswana and Zambia, at a shadow of the Victoria Falls.

Episode 10 – Odyssey in the mud: Democratic Republic of Congo

Overland 12 enters the Democratic Republic of the Congo, the diseased giant of Africa, which hosted on it’s territory a long and dramatic war. The situation is complicated just outside of Lubumbashi, capital of Katanga, and soon it falls into a real battle against the mud.

Episode 11 – Towards the heart of the continent: Democratic Republic of Congo

The difficult crossing of the Congo continues full of mud, between marshes and trails cut in the impossible forest. The convoy of Overland 12 moves on with difficulty into the wild heart of the continent, a few hundred metres at a time, by the force of the winch. We knew that this stretch would be difficult, but no one imagined how much.

The convoy of Overland 12 emerges victorious from Congo, in order to cross Burundi and Rwanda quickly, countries with beautiful scenery that have seen the consumption of the most atrocious civil wars of recent decades and today, they turned the page, they have taken different paths. Then we re-enter in a Congo that is still dealing with the conflict, to head towards Goma.

Episode 13 – The Africa that looks ahead: Democratic Republic of Congo, Uganda, Kenya

Overland 12 reaches Goma, in the troubled North Kivu province, to document the sad realities of war and the much more comforting reconstruction. Uganda, too, tells stories of success and hope, besides amazing us once again for the incredible beauty of the landscapes. With the entrance into Kenya we leave the green tropical rain forest for the Savannah.

Episode 14 – Revenge of the mud: Kenya and Ethiopia

If we thought the mud would be left behind, we were wrong. In Ethopia a bitter surprise awaits: high-intensity rains have devastated the slopes and it is not good news to discover that the bridge on which we were counting on no longer exists. Overland 12 faces the most difficult weeks of a long career of adventure.

Episode 15 – Overland to the rescue: Ethiopia

The team of Overland 12 are living dramatic days, blocked by the mud in one of the most remote regions of Ethiopia. Food and water are limited, while searching desperately for a way to continue, we are concerned about the outcome of the expedition.

Episode 16 – Return to the Desert: Ethiopia, Sudan and Egypt

Overland continues inexorably towards the goal of a difficult and spectacular expedition. After leaving Ethiopia, in Sudan the orange convoy found themselves in the Saharan desert, where the Nubian civilization flourished, before taking the path of the Nile, for a breathtaking race to the final goal.

Note: This series is in French with English subtitles.