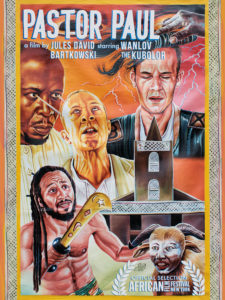 Picture this: A white American man travels to West Africa, gets cast in a Nollywood film, and is possessed afterwards by a ghost. This is the plot of PASTOR PAUL, a film that director Jules David Bartkowski is calling the first of its kind.

“An inspired send-up of indie filmmaking and the “Nollywood” genre, Pastor Paul is a triumph of absurdist humor – and a likely cult contender.” – YES Weekly Pick-of-the-Week

The film explores the remarkable confluence of New African Cinema, Christianity and Witchcraft, undermining the classic symbolic imagery of the “white man in Africa,” whether he be tourist, missionary, actor, or ghost.

Filmed in Ghana and Nigeria, Pastor Paul is the result of a guerrilla-style international co-production with Pidgen Films. It is the first American Nollywood film, an homage to the spirit – and spirits – of Nollywood’s self-determined narratives.

“The film’s portrayal of urban life, culture and living conditions in coastal Ghana and parts of Nigeria is compelling.” – Movie City News

“This is more of a feature film that you wear like a badge of honor. I survived Pastor Paul is what you’ll tell people. They’ll ask what that was and then you get to spring it on them. Good stuff and well worth checking out.” – Anderson Vision

In-home/personal use copies of the DVD are available on Amazon http://amzn.to/2HHhews. Or stream it if you prefer https://amzn.to/2rOdbZB.