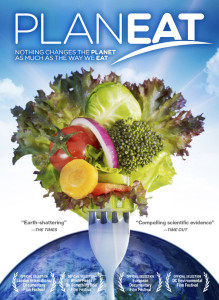 “When Food is the Problem, Can Food also be the Solution?” Planeat is the film that started the movement to understand the relationship between what’s on our plate and the health of the planet!

“Carnivores, take heed! The film ‘PLANEAT’ might convince even the most passionate meat-enthusiasts to lay off the stuff.” – Veggie Revolution

Where have we gone wrong? Why has the death rate from heart disease and cancer exploded in recent times? Why are the ice caps melting, the oceans dying and the forests being cut down as we produce the food necessary to support our burgeoning populations?

Against a backdrop of colorful and delicious food grown by organic farmers and prepared in the kitchens of world-famous chefs, PLANEAT for the first time brings together the ground-breaking studies of three prominent scientists who have made it their life s work to answer these questions.

“A thought-provoking exploration of issues raised by meat consumption and its effect on global warming, this is recommended” – Video Librarian

“Should be compulsory viewing” – The Herald

“The amount of research, evidence and the passion of the scientists and doctors featured is truly astonishing yet broken down and accessible. It deals with serious subject matter in a light, visual, humourous and non-arrogant way.” – Soundboard