PLUNDER: THE CRIME OF OUR TIME 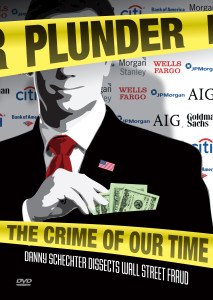 In 2006, acclaimed filmmaker, author and Emmy Award®-winning former broadcast news producer Danny Schechter was widely denounced as an “alarmist” for his film IN DEBT WE TRUST, which warned of the coming U.S. credit crisis. He was labeled a “doom and gloomer,” until the economy later melted down, ultimately vindicating his warnings. Schechter’s newest documentary, PLUNDER: THE CRIME OF OUR TIME, is a hard-hitting investigative film that explores how the current financial crisis was built on a foundation of criminal activity.

America’s financial crisis has become a global catastrophe. While politicians and some experts superficially blame “mistakes” and “errors” driven by greed or poor business models – often concluding that “everyone is to blame” – veteran journalist Schechter has probed more deeply into a complex web of fraud and crime that he shows played a major, if largely unreported, role in bringing the economy down. PLUNDER: THE CRIME OF OUR TIME looks into how the crisis developed, from the mysterious collapse of Bear Stearns to the shadowy world of trillion dollar hedge funds. Insiders who work in the industry and know it well tell both of these stories.

PLUNDER also shows how hastily arranged government bailouts did not revive the economy and may have lost billions. To tell this eye-opening story, Schechter spoke with bankers involved in these activities, respected economists, insider experts, top journalists including Paul Krugman, and even a convicted white-collar criminal, Sam Antar, who blows the whistle on intentionally dishonest practices. Ultimately, the film calls for a full investigation and structural reforms of financial institutions to insure accountability by the white-collar perpetrators who profited from the misery of their victims.