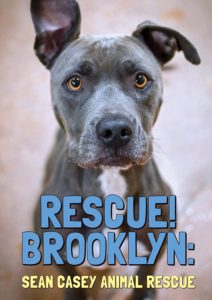 Some stories are bigger than their subjects…

“Rescue! Brooklyn” the story of Sean Casey and the  Sean Casey Animal Rescue (SCAR) a  501(c)(3) Non Profit No-Kill Animal Rescue & Shelter. SCAR is a Brooklyn, New York based shelter with an emphasis on caring for the most unusual of nature’s creatures. While dogs and cats make up much of Sean Casey’s everyday initiatives, everything from snakes and turtles to goats and alligators pass through the shelter seeking help, hope and home.

Sean Casey has been rescuing and placing stray and abused animals in Brooklyn and the New York City area since he was 15 years old. Currently he operates one of the most well-known, busiest, no-kill rescue shelters in the New York City area. The City (Animal Care and Control), and other larger shelters in the region often contact Sean Casey Animal Rescue to rescue special needs and neglected and abused animals. But there is much more to SCAR that meets the eye.

On top of the approximate 2000 pet placements the shelter accomplishes annually, SCAR is volunteer-based organization that also offers a work-for-

school-program for youths that assists them in attaining their H.S. diplomas and serves as a career development center for under-privileged teens. Part shelter, part community center, part Animal Rescue. SCAR is a very special place that brings the community together in a most unique fashion.

The Art of Brooklyn wrote:

“RESCUE! BROOKLYN is more than just a documentary about animal rescue. It’s a true Brooklyn story of compassion, community and second chances — for both the animals that are saved, and the army of dedicated volunteers who make SCAR’s mission possible.”

“The purpose of this endeavor is to aid unfortunate animals in the interest of a higher quality of life. We take in rescued, confiscated, neglected, injured, ill, unmanageable, or otherwise unwanted animals from private owners, zoos, shelters,

and other public organizations. These animals are cared for, and/or rehabilitated to the best of our ability and means until which time they can be found healthy, happy homes–whether it be through adoption to qualified candidates or legally released into habitats suitable to the specific species in conjunction with licensed wildlife rehabilitators.”