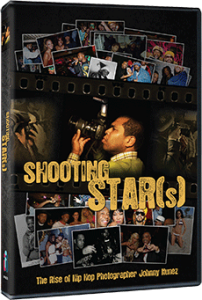 “Shooting Star(s)” follows Johnny Nunez, who was abandoned as a baby and later adopted by a Puerto Rican family, as he overcomes the obstacles imposed by his humble upbringings in Brooklyn, New York to become today’s most prominent Hip Hop celebrity photographer.

Filmmakers Axel Ebermann and Daniel Frei document the incredible journey of this man, who is now on the verge of becoming a celebrity himself. The film shows the glamorous life of Johnny Nunez as he mingles with prominent figures such as Russell Simmons, Al Sharpton, Kanye West, Kimora Lee and Fabulous. The film also portrays the inspirational journey of a man who defies poverty and racism and uses his wit, tenacity and faith to pursue his American Dream.

“Mr. Nuñez delivers roundhouse kicks and body blows and says lines that are unprintable in this newspaper.” – The New York Times