Slits – Here To Be Heard 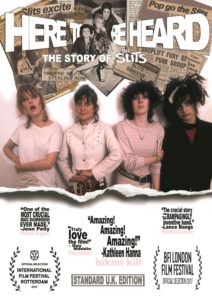 Contemporaries of The Clash and Sex Pistols and the grandmothers of the musical movement known as ‘Punky Reggae’, the feature documentary tells the story of the Slits, and the young women pioneers of the mid-70s Punk era.

From a female point of view, the story arc runs from the inception of the group in 1976 to its end in 2010 (with the death of lead vocalist, Ari Up).

When the Slits emerged on the scene in 1976, “girl bands” – and what a condescending phrase that was– were an exotic and scarcely tolerated rarity. They did not want to look pretty or sexy by male standards; they wanted to be tough and rock’n’roll.. There was an enormous amount of misogynist prejudice against them, although this was perhaps hardly noticed in the whirlwind of controversy and anarchy that punk conjured up in those years. It was, after all, a horribly violent culture.

By the early 80’s, the Slits were experimenting with new musical forms and had every claim to be considered a real influence both musically and culturally. 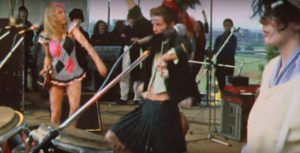 Of the film, The Stranger called it a “long-overdue documentary about the women-dominated group that created one of the greatest albums ever—1979’s Cut—is the respectful historical treatment these riot-grrrl precursors deserve. Badgley’s scrappy, heartfelt portrait mirrors his subject’s DIY aesthetic with a true fanatic’s intensity. It may lack polish, but its zeal in telling an important and under-acknowledged story more than compensates for its limitations”

Critic Vivien Goldman summarized the Slits’ galvanizing effect on crowds and music journalists: “They looked as topsy-turvy as the music sounded. It was a new paradigm for females. They were provocative and outrageous and were having fun. They weren’t manufactured. They didn’t give a fuck.”

“One of the most crucial music documentaries ever made” – Pitchfork Magazine