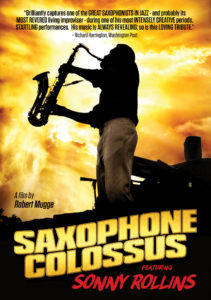 “Widely hailed upon its release as essential viewing, not just for fans of jazz but for anyone even remotely interested in the creative process. [A] remarkable film.” —Mike Joyce, Jazz Times

Tenor saxophone master Sonny Rollins has long been considered one of the most important artists in jazz history, and still, today, he is viewed as the greatest living jazz improviser.

In 1986, filmmaker Robert Mugge produced SAXOPHONE COLOSSUS, a feature-length portrait of Rollins, named after one of his most celebrated albums. The project began in May of that year when Mugge and a small crew accompanied Sonny and Lucille Rollins to Tokyo, Japan where the Yomiuri Nippon Symphony Orchestra premiered his Concerto for Tenor Saxophone and Orchestra with Heikki Sarmanto of Finland conducting and Rollins himself soloing throughout. The next big shoot was in 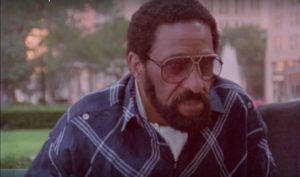 August, when Mugge and a larger crew filmed Rollins and his ensemble performing at sculpted rock quarry Opus 40 in Saugerties, New York. The most surprising part of the latter concert was that, midway through his performance, Rollins leaped from a 6-foot cliff, fell to his back on the ground and, in spite of suffering a broken heel, continued to play his saxophone.

Rounding out the production were interviews with Rollins in Japan, with Heikki Sarmanto in Japan, with Rollins and his wife Lucille in New York City, and with jazz critics Ira Gitler, Gary Giddins, and Francis Davis, also in New York City. A soundtrack album, “G-Man,” released by Fantasy Records, was named by Village Voice music critic Robert Christgau as the best album of 1987, whether jazz or rock, and the fourth best album of the decade. 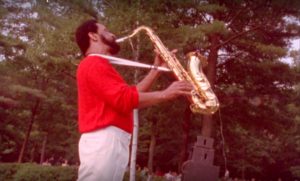 “Revelatory and engrossing. SAXOPHONE COLOSSUS, which treats its subject with the homage due such a formidable music figure, is brightly conceived and evolves into a superb musical profile.” —Ernie Santosuosso, Boston Globe

“Solos of supernatural strength. A film worth seeing, and much more worth hearing.” —Neil Tesser, Chicago Reader

For this new release of SAXOPHONE COLOSSUS on both Blu-ray and DVD, the film has been given 4K remastering, and an updated commentary by Mugge is included as a bonus feature.

EXPLORE OUR ENTIRE COLLECTION OF FILMS BY ROBERT MUGGE