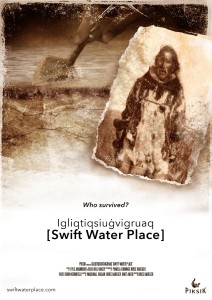 The story of the arctic village known as Igliqtiqsiugvigruaq (“swift water place”), located near present-day Kiana, began more than 200 years ago along the banks of the Kobuk River in northwestern Alaska. Here, the Iñupiaq people trace their history back more than 10,000 years.

Archaeologist Dr. Douglas Anderson and his wife Wanni W. Anderson of Brown University have studied this region and the Iñupiaq for more than 50 years, uncovering the past and capturing the oral histories of those who came before.

During a recent excavation of the Igliqtiqsiugvigruaq site, Anderson and his team discovered human remains. As policy dictates, archaeological excavations on National Park Service land must stop when remains are found, and all living descendants must be notified.

But something different happened this time. A decision by Kiana’s Traditional Council changed National Park policy and enabled the dig to continue at Igliqtiqsiugvigruaq.

Through arresting b-roll, archival footage and interviews, IGLIQTIQSIUGVIGRUAQ [SWIFT WATER PLACE] examines a partnership and an understanding between the people of Kiana and Anderson’s team to uncover and preserve important aspects of the culture and history of the people in Arctic Alaska before the river washes away the ancient village.

“This is not simply another story about conflict and resolution between archaeologists and Native American communities, but rather the values of a local remote community vs national bureaucracy, with archaeology and archaeologists caught in the middle.” – Archdox

Public Performance and Digital Site Licenses are available through Soundview Media Partners. To inquire or to place an order, write to info@soundviewmediapartners.com or choose from the License Options below…