The Price of Empire (WWII) 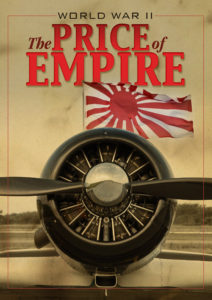 THE PRICE OF EMPIRE (WWII)

Told in 13 episodes through the unparalleled resources of one of the world’s great film archives, and brought to life by the testimony, recorded exclusively for the series, of more than fifty eyewitnesses to the war, this is the story of the greatest man made event in history.

Often the story of WWII is told from 1 September 1939 with Germany’s invasion of Poland. But empires had been in conflict since Japan’s invasion of China in 1937. The second world war encompassed the globe in 1941 when the Japanese attacked the American airbase at Pearl Harbor, only to end with a new weapon for a new age.

Interviews with eye witnesses from all major theatres of war interlace images of events captured in the British Movietone Archive, providing living testimony to those moments in time.

The Second World War ended more than 70 years ago, but wars never end. For those who fought the memories are indestructible. To understand something so profound we must start before the beginning with what Churchill called, The Gathering Storm.

Japan’s unprovoked invasion had plunged china into war and Europe had been brought to the brink of conflict. In Italy Mussolini introduced fascism to the political landscape and Hitler dismantled democracy. Their expansion threatened neighboring nations.

Six months have passed with very little action in the Phony War. That is about to end and a new word is added to the vocabulary of warfare…Blitzkrieg.

Six months after the fall of France, Vyacheslav Molotov visited Berlin to discuss how the world was to be divided after victory. He was told Britain was defeated. But Britain wasn’t beaten. Just alone.

In 1941 Britain is holding its own, although it is still threatened. Japan took action that made world war two truly global. but before that, the story of the second world war is to be transformed by a single word. Barbarossa.

Before 1941 was half over the soviet union was locked in struggle with Germany. Before the year was out, humanity would be hanging on the fate of Roosevelt’s great union, compelled to join the struggle by what he termed “a date which will live in infamy.”

It took Hitler half a war to gain an empire. But it would also take him half a war to lose one. Japan also wound up growing and growing only to start to fall about halfway through the war.

There was a plot that eventually Germany, headed east and Japan, heading west, would eventually join up in the Indian subcontinent to make a massive territory. But too many setbacks in 1942 marked the end of the beginning.

The United Nations planned how best to secure victory and how to arrange the post war world at conference after conference. The Allies fought one war on two fronts. The Axis fought two wars. For both, 1943 would mark the beginning of the end.

In 1943, the axis was on the defensive everywhere. In 1944, The Allies strength would grow in the East

in, the Soviet Union, and with the opening of the second front.

After starting on the second front, the Allies broke out of Normandy and launch the Red Army. In the East, the invasion of the Philippines will bring the Allies one step closer to the home islands.

The war was started solely be Germany’s and Japan’s acts of aggression. But in 1944 they are being driven from the lands that they had conquered and are being pressured to an act of unconditional surrender.

After years of war, the defeat of Hitler and the Third Reich is inevitable. Peace in Asia will follow peace in Europe after the detonation of the atomic bomb.