To Auschwitz and Back 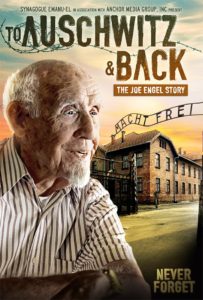 “The combination of words and pictures creates a nightmare world in our minds, one which is too horrible to contemplate as Engel’s unfaltering narrative builds with the intensity of a suspenseful thriller. To this end, TO AUSCHWITZ & BACK: THE JOE ENGEL STORY is a most irreplaceable record of this man’s passage through a literal Hell and his miraculous survival to tell the tale. The presentation is admirably low-key and subtle, eliciting a sudden surge of emotion at the end which was both unexpected and exceedingly well-earned.” – HK Film News

“I am telling you to find out where you can see it or wait and buy the DVD. I do not believe that I have to say what an important film this is” – Amos Lassen for Judaica.

From the Producer of Circle Unbroken: A Gullah Journey from Africa to America comes the film that served to launch The Holocaust Education Film Foundation. It tells a story of persecution and one man’s inner-strength, fortitude and daring escape from internment in Nazi Germany.  Joe Engel’s determination to survive has resulted in him becoming a treasured citizen, community leader, teacher and philanthropist in America.

Born in Zakroczym, Poland in 1927, Joe Engel was taken by the Nazis at 14 and never saw his parents again. He is the embodiment of living history and spends his retirement years ensuring the Holocaust is never forgotten.

From the overwhelming despair of the Warsaw Ghetto, to the shroud of unceasing death and suffering that was Birkenau and Auschwitz, Joe then takes you through his escape from a Death Train at 17 and covert work as a freedom fighter until Liberation in 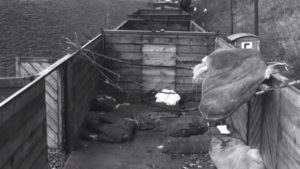 Joe’s is a vivid journey to hell and back; enriched by an incredible and personal approach to storytelling. His number tattoo may have faded over time, but his passion for life and his story continues today.

With the assistance of “The United States Holocaust Memorial Museum’s film and photographic archives”, filmmaker Ron Small (Circle Unbroken, Medals of World War II) has successfully weaved Joe Engel’s incredible storytelling into a riveting visual presentation that is both historic and contemporary. 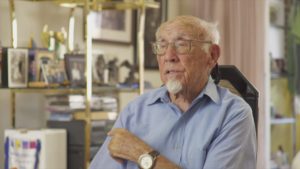 With an unwavering will to live, Joe Engel overcame unimaginable horrors, earned his freedom through a daring escape, and fought to free others. He currently resides in Charleston, S.C.

Many people can tell a story. Very few can compel you to listen. Joe Engel, at 90 years of age, knows how to tell his story. His life is a story of faith, renewal, inner-strength and redemption. He is a charming storyteller who hopes that people will listen and learn and most of all… “never forget”.

3.5/4 stars: When he moved to Charleston, SC, after barely surviving the Holocaust, Polish Jew Joe Engel, born in 1927, opened a dry-cleaning business and never spoke in detail about his experiences in the Warsaw Ghetto and the Auschwitz-Birkenau death camp. Upon retiring, however, Engel made it his mission to educate as many people as possible about what the Nazis wrought and how—still to his amazement—no one could stop it. Filmmaker Ron Small draws on archival footage capturing Nazi atrocities in this documentary that tells one more valuable story about an innocent victim’s personal nightmare. Engel’s sharp memories of barely lasting through acts of utter sadism (including being left outside in freezing weather after cold water was poured over him), and his daring escape and subsequent work with the Resistance, are both dispiriting and inspiring. Speaking calmly but firmly, Engel notes that not a day has gone by when he doesn’t think about the parents and family he never saw again—or the youth that was stolen from him. A powerful portrait, this is highly recommended.” – Video Librarian

“TO AUSCHWITZ AND BACK: The Joe Engel Story is a story told exactly as it happened to a very young man in 1927 Poland. Joe tells it with such memorable detail that I could not help but soak in every word he said.” – Movie Maven 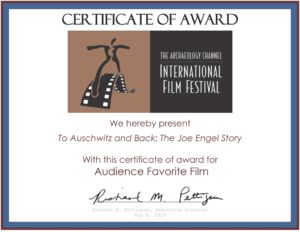 “It would fit neatly alongside Schindler’s List or Shoah on any shelf reserved for films on the subject… Small has created a 47-minute film that weaves oral history with archival material in the service of a documentary that is as painfully graphic as any I’ve seen. Still, it’s Engel’s spirit that triumphs over evil here. I won’t be surprised if someone in Hollywood attempts to expand To Auschwitz and Back  into something a bit more theatrical. It couldn’t possibly be more dramatic.” – Movie City News

“In these troubling and uncertain times that we live in, a film like ‘To Auschwitz And Back: The Joe Engel Story’ is an ever important reminder of what has happened and how we should never forget the horrific events that took place. We should always learn from the past or else we are doomed to repeat it. That notion certainly seems very timely in light of current events. In terms of the documentary itself, it’s a no frills documentary and that’s the way it should be. This is all about one man telling his incredible story. Yes, there is horrifying archival footage spliced in at times, but for the most part, the camera is set on Joe Engel as he tells his story. I’ll admit, it would have been interesting to hear more details about his time in the resistance (as well as other events), but the fact that we are hearing his captivating story at all is more than enough.” – DVD Corner

“Five Star Film!! We need more Joes in this world today! Have a longer and
happier life Joe as your remarkable story will never be forgotten.” – St. Bernard Voice