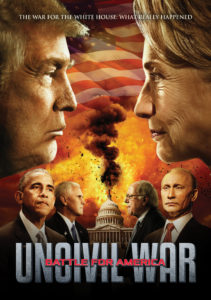 What really happened? How did the party of Lincoln become the party of Trump? Was the battle for the White House only the beginning?

Uncivil War is a new documentary exploring the battle between now President Donald Trump and Hillary Clinton for America.

Award winning filmmaker BC Furtney (writer for Trumpocalypse Now! and One Nation Under Trump) explores the battle for the White House. Donald J Trump faces off against Hillary Clinton in an epic political war that splits the most powerful nation on Earth and rattles the global sphere. As a new kind of United States President emerges, what will be America’s fate’.