Walking Through History with Tony Robinson 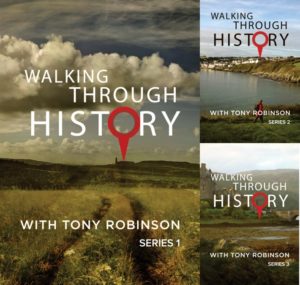 In this extensive episodic series, acclaimed English actor, comedian, author, presenter, historian and political activist Sir Anthony “Tony” Robinson embarks on spectacular walks through some of Britain’s most historic landscapes and locations in search of the richest stories from England’s past, many of which impacted the world.

Exploring subjects that range from the 18th century smugglers of Cornwall to the Battle of the Glens, the mysterious heart of the Dark Ages, the backdrops of Jane Ayre and Wuthering Heights, the megalithic stones that pepper the historic landscapes and much more, Walking Through History is a virtual encyclopedia of visual British history.

It’s back to  back to 1940 when extraordinarily, the sleepy county of Dorset became the front-line in the war against Hitler. His five day 60 mile walk along the Jurassic coast reveals the county’s hidden World War II story

The Birth of Industry

Tony heads off on a 40 mile walk through the glorious Peak District and along the Derwent Valley. The landscape here is incredible; wild, dramatic and romantic. It’s also the place where one of the most extraordinary chapters in British history unfolded; the Derwent Valley is the place where the Industrial Revolution began. This is a journey that reveals how Britain transformed itself from a nation of farmers into the industrial powerhouse of the world. Richard Arkwright established the world’s first factory in the quiet Peaks village of Cromford. Nearby is the building that would lay the foundations for today’s skyscrapers.

From the impressively preserved Penshurst Place, where author Philippa Gregory helps Tony relish the fate of the grand Duke of Buckingham at the hands of the young Henry the Eighth, he travels up what used to be secret paths to Hever Castle.

Battle In The Glens

Tony’s journey of discovery starts in Sheil Bridge, at the mouth of Glen Shiel, where he heads to the site of the earliest known dwellings here, the ‘skyscrapers’ of the Iron Age.

The Path to Stonehenge

Walking from the stone circles of Avebury to Stonehenge, Tony explores the origins, the latest theories and the connections between Europe’s finest collection of Neolithic monuments.

Romans in the Lakes

An exploration into the Lake District looking at the impact the conquering Roman army left on  the the stunning landscape.

Tony journeys along the fabulous Cornish coast to discover why and how smuggling became the biggest industry in the area for decades during the eighteenth century.

The Liverpool-Leeds canal is the longest single man-made waterway in the country; Tony travels the first 50 miles from Liverpool to the iconic Pier at Wigan, uncovering the extraordinary stories from its Georgian and Victorian origins.

The Dark Age of Northumbria

From just north of the Scottish border, Tony sets off across the ancient kingdom of Northumbria, which in the 7th century stretched from Edinburgh to York, on the trail of the truth about St. Cuthbert, the considered by many to be the greatest saint of his time.

Tony takes in the wonderful seascapes of the North Norfolk coast, determined to discover how the area remained so blissfully unchanged when the Victorian age of industry and railways transformed lives and land across the country. From the arrival of Bertie, Prince of Wales at Sandringham House to the opening of Cromer pier, the four day walk unveils an extraordinary tale of landowning power.

Tony’s walk tells the life story of the remarkable Bronte family and explores how the moors inspired their most famous novels.

Tony walks across the Cairngorms to Balmoral, in the footsteps of Victoria and Albert who discovered and promoted the Scottish Highlands, enthusiastically adopting the kilt, the Highland Games, hunting and fishing.

The Norman Conquest of Pembrokeshire

Tony traces the Norman conquest of this corner of Wales which still feels more English than the rest of the country, nearly 1000 years later.

For five years, the Channel Islands were occupied by the Germans, the only part of the British Isles to be so. Tony tells of the story of the Occupation; its physical impact still very visible and the experience still remembered.

Nowhere is fact and fiction so entwined than in the stories of King John, Robin Hood and the Sheriff of Nottingham. Yet out of this legendary time came Magna Carta, a foundation stone of modern democracy. On the 800th anniversary of the signing, Tony unravels the history from the myth.

In 1685, a rebel army landed at the pretty Dorset port of Lyme Regis and swept up through Somerset, pausing at Taunton to declare its leader, Duke of Monmouth, the rightful king. Tony walks in their footsteps and relives their spirit.