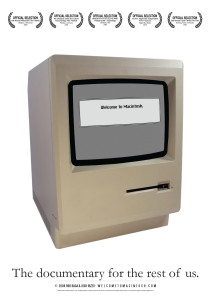 WHO, you might ask, could have predicted then what we know now?

This film was the first documentary of its kind to mix history, criticism and an unapologetic revelry of all things Apple into a movie experience. There have been tales of Steve Jobs and stories of Apple Computing, but Welcome to Macintosh explores the early years of Apple, the many challenges the company  faced, and what the future may hold for the company and its products at the time of the production in 2008. Now, the film is a sneak peek back into the formative and historic years of and at Apple.

In Welcome to Macintosh, ex-Apple employees, engineers and community members offer insight on the company’s innovations, failures, cultural impact and more beyond the reign of its co-founder Steve Jobs.

“The movie is so much on the mark… I’ve been involved in some other independent films, and this one is by far the best one I’ve seen” – Steve Wozniak

“Jim Reekes is a good storyteller, and his sarcasm is absolutely hilarious.  He was a surprise star of this movie” – IPhone J.D.

“…looks at how Apple has changed the world” – PC Magazine