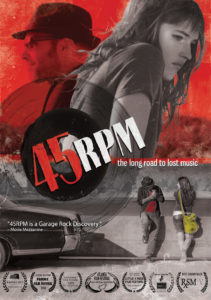 Charlie, an artist who seeks a connection between her work and her estranged father’s music, teams up with Louie, an obsessive record collector from Memphis.

Together they begin an exhaustive search for a rare 45 RPM recording from the 1960’s Arkansas scene that takes them on both a journey across the seldom-explored landscape of the new Old South as well as a trip through musical inspiration and influence.

“The film dabbles in questions on the nature of art and how to handle and overcome those foundational, youthful moments of artistic discovery” – Movie Mezzanine

“[5 out of 5 stars]: Music only acts as a catalyst for what this film so subtly but perfectly portrays: the relationships that we often take for granted but which matter the most in our lives – Vue Weekly