Don’t Look at Me That Way 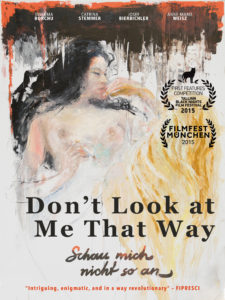 “Intriguing, enigmatic and in a way revolutionary” – Fipresci

Themes of femininity and identity come into view as a chaotic love drama foments between Iva, Hedi, and Iva’s father.

Hedi is the new neighbor of Iva who raises her daughter Sophia by herself. The two women start a love relationship and Iva is desperately in love. Suddenly Iva’s father appears, to whom Hedi feels strongly attached. It seems that only one world exists for Hedi: her own.

Themes of femininity, identity, sexuality, and adulthood all courageously collide in this German-Mongolian love drama.

“Resolutely abstract from its beginning, Uisenma Borchu’s Don’t Look at Me That Way is a compelling examination of female roles, the power of sexuality and alienation between cultures. Combining a naturalistic style with an ever-present air of the surreal…” – Cineuropa

“It’s a dramatic story with strong performances, and while it won’t be for everyone, cinephiles who like material that’s a little more challenging may want to seek it out.” – San Antonio Express News