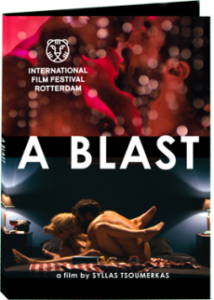 “With its passionate, impetuous, and revolting hero A Blast IS the Greek crisis.” – Sueddeutrsche Zeitung, F. Goettler

Set in the fervent years of the collapse of the Greek economy, A Blast tells the story of a generation’s disillusionment and radicalization. Maria starts her adult life with the best of intentions. Ten years after, no matter where she looks her world is cracking. Unwilling to reconcile with a life of unreturned care, lost dignity and broken-down desire to live, Maria attacks. She attacks herself, her past, the people she loves, her country and the perception of her sex in a relentless battle to find truth, in her and around her.

“Tzoumerkas directs each scene to its boiling point, resulting in montage sequences that stay in mind for long. Angeliki Papoulia, one of the most fearless European actresses, plays Maria without emergency breaks.” – Der Spiegel, Oliver Koever

“Syllas Tzoumerkas talks about the state of a generation without allegorical detours. He goes straight to the Greek state of things, using the anger, frustration, the restlessness, the pain and the passion of the protagonist Maria with breathtaking speed.” – Frankfurter

“A black, bleak, urgently contemporary film. The frantic, unsettling and intriguing record
of a woman’s journey, Syllas Tzoumerkas’ charged personal diatribe against an economic system seemingly designed first to make people, and then to break them.” – The Hollywood Reporter, Jonathan Holland