A Fancy Piece of Homicide 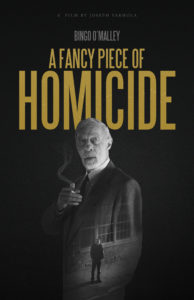 Winner of the PIFF award at the Pittsburgh Independent Film Festival.

Directed by Joseph Varhola (When the City Sleeps), the film tells the story of a man, who after serving an extended prison sentence for the killing of a man he was hired to investigate falls into a trap. The ex-private eye approaches the completion of his memoirs to set the record straight, when one night photographs with connections to his past anonymously begin to show up at his front door, along with a mysterious man who is receiving pictures of his own.

Film Kitchen called it “a character study set in the psychological/mystery genre with its roots in film noir”, and according to Varhola, Chinatown, The Big Sleep, and The Long Goodbye greatly influenced his style,  themes, and production approach.

A Fancy Piece of Homicide is a wonderful example of contemporary independent production making use of historically powerful cinema styles and presents an opportunity for film students to see how such can be accomplished with grace and a somewhat limited budget.