A Venue for the End of the World 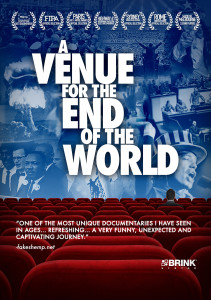 What does it feel like to have half a million people in the palm of your hand?

A film by Aidan Prewett

Haunted by uncanny similarities between Nazi stage techniques and the showmanship employed by modern entertainers, a filmmaker investigates the dangers of audience manipulation and leader worship.

“I found myself catching on to some of his shrewd tactics midway through the film and spent the rest of it in awe of his filmmaking.” – Fakeshemp

In-home/personal use copies of the DVD are available on Amazon: http://amzn.to/1okXyEL or stream it if you prefer https://amzn.to/2IqmPYx.