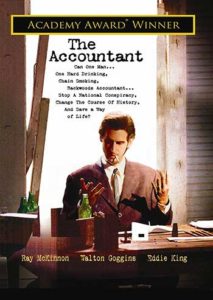 Exploring the plight of small farmers in our bank-dominated society, this Academy Award Winning ® film tells the story of a mysterious accountant whose remarkable mathematical skills just might save the O’Dell family farm. It is as appropriate today as it was when it received its Oscar in 2001.

Armed with a keen ability to add, an unquenchable thirst for bottled beer, and a stack of receipts, the accountant takes the O’Dell brothers on a strange journey that reveals the plight of America’s family farms. A cult classic with many passionate supporters, the film again resonates well during these hard economic times.

Stars writer/director Ray McKinnon (Rectify, O Brother Where Art Thou,  Deadwood, The Blind Side) and Walton Goggins (Justified, The Hateful Eight, The Shield).

“As hysterical as it is haunting, and featuring a brilliant performance from McKinnon, “The Accountant” was the best film of the Austin Film Festival of any length no matter how one adds it up” – Film Threat

“You can tell that they put their hearts into this film. It’s well-made, superbly written, and well-acted with a great blend of humor, quirkiness, and an effective message. It deserved the Oscar win.” – Smith’s Verdict