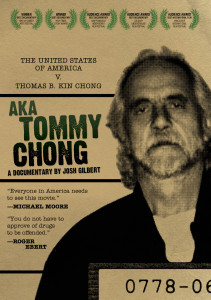 At the height of the Bush administration, Tommy Chong of Cheech and Chong was charged with selling bongs over the internet and sentenced to nine months in federal prison. As part of the government’s $12 million ‘Operation Pipe Dreams’ drug paraphernalia sting operation, Chong, a vocal opponent of Bush’s handling of the War on Terror, was singled out among 55 defendants to serve time. Filmmaker Josh Gilbert captures the post-prison, avuncular Chong as he turns his SWAT team arrest into hilarious stand-up material. But the laughs are seasoned by the recognition of our government’s questionable priorities and its shameless use of the judicial system to scapegoat a counterculture icon.

“A touching portrait of a gentle soul who falls down the rabbit hole of anti-drug insanity.” – Toronto Sun

“Everyone in America needs to see this movie … The real stoners in this excellent documentary are the administration officials drunk with power and out of control, and a nation of otherwise good people who’ve been given the worst drug of all–fear.” – Michael Moore

“You do not have to approve of drugs to be offended.” – Roger Ebert