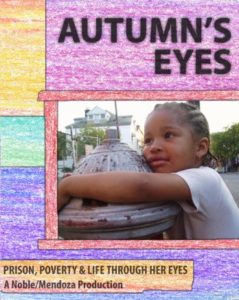 Autumn’s Eyes is a compelling documentary about a 3-year-old girl who tries to navigate through the harsh reality of severe poverty, her teenage mother’s incarceration, and looming foster care. Charming, obedient, and unable to fully comprehend the severity of her environment, Autumn is shielded from her own reality. Caught between the innocence of childhood and the growing necessity to be an adult, she represents hope to a family of women caught in the cyclical web of abuse, incarceration and poverty.

Autumn’s Eyes captures this impressionable time in this child’s life, and ask the greater question: is there truly hope for a child growing up in these circumstances? Through the perspective of a little girl, Autumn’s Eyes explores this perilous state of hope.

“Mendoza and Noble’s fine personal documentary looks at three generations of women in poverty from the perspective of Autumn Collier, a clever and observant 3-year-old girl in Jersey City. It is at heart a kind and sensitively filmed story of a little girl longing to reunite with her mother, and vice versa.” – Austin Chronicle