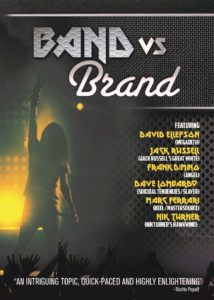 When does a “Band” become a “Brand”, and how have the changes in the music business morphed what a band is, what a music brand is and what a record company itself is?

When the new millennium began with record companies suing their own customers for peer-to-peer downloading, the graffiti was on the wall. Like the industrial revolution before, the digital age wiped out the multi-billion dollar record business we once thought recession proof and timeless. But the music didn’t die, it simply morphed into another dimension as the infrastructure built to filter, foster, package, market and sell it disappeared.

Now music exists in an unfiltered internet ocean requiring navigational tools like Spotify and Pandora. And the vestiges of past record companies, co-opted into entertainment conglomerates, now create brands instead of artists, with commercials, soundtracks, and albums produced, not for the music, but to sell the brand.

Is branding a band a right move or a controversial music business maneuver to create something bigger than the band itself allowing the band to enter into other business realms ranging from the obvious long-standing merch business (T-Shirts and Hats) to categories unrelated to music?

BAND VS BRAND is a documentary film focusing on the current state of the music business and on how “the brand” of a rock group, in many cases, has more power than the band members themselves.

“Provides food for thought for musicians, fans and others interested in the music business. A strong optional purchase” – Video Librarian